To vax or not to vax - there is no question

I’m not normally a bandwagon type of person – but recent press has made me want to leap on it and anything else passing by.

I was really alarmed to see the front page of the Courier Mail yesterday (Rates lower than needed to stop spread of disease).

Being one of those ‘inner Brisbane residents’ to which they refer, I have to admit I was horrified – on two fronts.


How can anyone, in all consciousness,(with an iota of intelligence) claim to have happy, healthy kids as a direct correlation to the fact that they weren’t immunised? What has that got to do with it? I, too, have a very happy, healthy yet fully immunised daughter.

But what got me was to go on and say, “I’m not worried about chicken pox, measles or mumps.”

So...knowingly putting your child at risk of having these illnesses is OK then? But giving them an excellent chance in preventing them in the first place is not. I'm ever so glad that she's not worried about them. Did she ask her kids at any point if they would be happy to be as sick as a dog?

Severe side effects from these so called ‘childhood illnesses’ may be rare and are probably the preferred preventable diseases to catch. But having said that, I lost my dearest friend at school - to a bout of chicken pox.

I also find it interesting that she didn’t say, “I’m not worried about whooping cough or polio.”

All I ask of this mum and others like her –


I would hazard a guess and answer ‘no’ on all fronts.

The reason vaccinations work so incredibly well is because of the herd effect. Diminish the herd size and you compromise the effect.

(But this is – the Australian Academy of Science ‘The science of immunisation’  Please read and be armed with current science and robust research.) 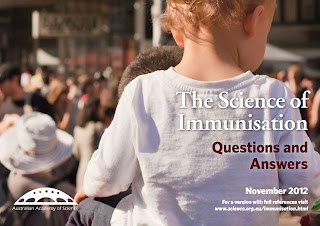 Growing up in our family, we would often hear the expression, 'What did you do with the money?'

'What money?' One would naturally ask.

'The money your mother gave you for singing lessons.'

This unkind expression invariably followed any impromptu vocal performance, be it in the shower, while vacuuming or just while shooting the breeze.

OK, I admit, as a family we are not known for our crooning capabilities. As performers, we were all great cooks.

Which is why it is only biological that the short one carries on in this fine familial fashion.

She can't sing her way out of a wet paper bag. She couldn't carry a tune even if it was handed to her in a Louis Vuitton. This child's vocal range scares small children.

Which is exactly why I was quite surprised yesterday with her genuine lack of empathy.

Loudly singing her way around the aisles of the local grocery store, unaware of the pained expressions of everyone within earshot, she leaned over to me and whispered...quite audibly, 'Do you think everyone is enjoying my singing?'

Without a doubt, these innocent bystanders, upon whom suffering was unwittingly meted, may at the very least reconsider their shopping routines from now on...

Posted by Meredith at 9:29 PM 2 comments