I had this funny feeling come over me the other day. Something I could only describe as foreign and just a little bit uncomfortable.

It took me a while to recognise it for what it was…Mother Guilt.

I have heard about this phenomenon. I have even read about the condition, but I don’t know that I have ever really fallen victim to it.

I am here to tell you…it wasn’t all that pleasant.  But it made me stop and think, why do so many fall prey to this emotional rollercoaster?

But most of all, how did I vaccinate myself against it?

So, here’s my five-point plan on how to vaccinate yourself against the insidious ‘Mother Guilt’ disease.

And if all else fails, take a deep breath, step back and see the funny side of things.  Despite a good laugh being infectious, it is the best form of protection against Mother Guilt.  Take it liberally and keep within reach of children. 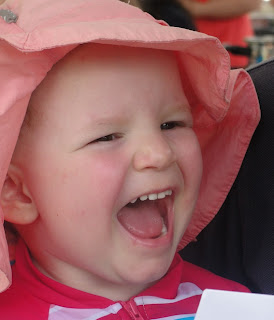 Posted by Meredith at 4:56 PM 0 comments

The joys of toddler travel


Over the last couple of years we have become what I would consider veteran toddler travellers, as opposed to the virginal variety when I first started this blog.  There is not a lot that we can’t handle now, well so we liked to think…then our favourite Australian airline, made famous by juvenile choirs hanging off cliff faces and traipsing through waves, threw us a curve ball.

In a moment of questionable clarity, we booked seats on the red eye out of Brisbane. Ordinarily flights to our nation’s capital take just over an hour.  With a just-after-5am scheduled departure, we would be in Canberra close to 8am (allowing for daylight saving) and we would have the whole day ahead of us for touring the sights. Whilst it would mean a 3am wake up call, we thought it would be worth it. That was our first mistake…

Things were going along swimmingly.

Daddy O’Connor headed over with the ever-trailing toddler. He returned wearing a wry smile, yet appeared somewhat ill at ease. ‘They just had to change our seats.’ He declares confidently. What he wouldn’t tell me was why.
With a prompt departure on the cards and the promise of breakfast, things were looking up.  Well…as much as things can when airline food is on the menu. The captain reassured us that we were on time and he would have us disembarking in Canberra at 8am. Something to look forward to.

Along with the announcement of our descent, the captain informed us of a heavy fog in Canberra (something I have since discovered is not an unusual occurrence).  Several planes have had difficulty landing and we were in a holding pattern, circling the nation’s capital. Twenty minutes later, the captain reassured us that the weather had cleared enough for 50 000kg of metal to come hurtling down towards the runway. A sharp descent ensues, followed by a severe case of whiplash as the plane is wrenched back up into a vertical position, reminiscent of Maverick and Goose.

Apparently not. All the while the short one snored on.

OK. I got the distinct impression that we were now going a lot higher than if we were just continuing our circling idea. Nope, I think we have gone back to altitude and we seemed to be suspiciously heading in a straight line as opposed to banking right…Sure enough our friendly captain returned with more good news…Sydney anyone? Apparently the weather is fine there.

It is about now that my beloved informed me of the reason why we were moved.  It was not because of the captain’s dislike for small children after all.  It appeared that one of the instruments on the plane was malfunctioning.  It was about now that I turned to Paul with eyes like saucers and said in a particularly measured way, ‘Two words that should never be placed together in a sentence are plane and malfunctioning.’

He went on to say that he didn’t want to worry me. Well, why in God’s name had he chosen this particular point in time to worry me instead?  That same particular point in time when the bloke up the front in the hat and stripes had just told us that he couldn't get this hunk of metal safely on the ground because he couldn't see anything; that we had just about run out of fuel after circling Canberra for over 40 minutes; and that our type of aircraft did not have a vital instrument that allowed pilots to land planes safely in fog…

Right, so let me get this clear…not only did we have malfunctioning instruments, we also had missing instruments. We were cruising at around 700km per hour, we were stuck up at a great altitude…and we were about to run out of fuel.

Look, I am no pilot, granted. But you would think that IF we were scheduled to arrive in Canberra in the early hours of an autumn morning, in a valley notorious for heavy fog, one would allocate a plane that had all the bits to do it. Clearly not. It is far better customer service to cancel a flight. Re-direct passengers to another state.  Disembark all passengers – including the dead weight of a sleeping three year old. Not offer any customer service or assistance. Make you walk the entire length of Sydney airport, carrying aforementioned dead weight. Make you queue for a further 15 minutes while your boarding passes are re-issued. Then tell you that your new aircraft (with working bits) is scheduled to leave on time at 11am.

Our new friendly and one hopes competent captain informs us that as soon as the aircraft is re-fuelled we’ll be on our way. Fifty minutes later we are still sitting on the tarmac while we await the re-fuelling crew…

For God’s sake, give me the bloody keys and I’ll take it down to the servo myself!

Posted by Meredith at 2:36 PM 0 comments