Our stopover in Dubai included a City of Merchants tour around this fascinating city.  Much of the development of this city has been since 1980.  Driving around, you are immediately hit with an overwhelming sense of consumerism, opulence, multiculturalism, excess and immediacy.


Bigger is better, hence why the tallest building in the world calls this place home.  Whilst modern Dubai is still in its infancy, there is a feeling of great urgency to get this place built. The rate of development is astounding, as is the variety of architectural styles.  Old mixes with the new, rich with poor, Muslim with Christian, traditional spice and gold souks with the biggest and most modern shopping centres in the world, desert sands with rolling grass fields.  This is a place of contrasts. 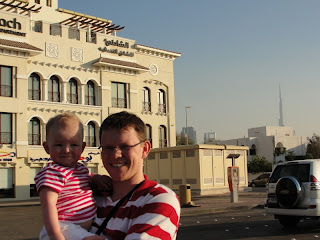 One thing that struck me about this place was the concept of citizenship.  Only the true indigenous of Dubai can claim to be citizens.  Everyone else is considered an ex-pat.  To live in the Emirate you must be eligible for a visa, and for that you must be employed.  As soon as you are out of work, or retire, you must leave the Emirate and live elsewhere.  Amazingly, our guide, who was born in Dubai and lived there all his life, is not considered a citizen and assumes the nationality of his parents.  He renews his contract with Emirates airlines every three years.  When he is no longer able to renew his contract or chooses to retire he will have to leave his home and immigrate elsewhere. I suppose this is the compromise you take for living tax free.

Only 19% of the population are considered citizens.  True citizens are well looked after by the government.  They receive a very nice house for free, many in the wealthier Jumeirah beach area, as well as many other social services. The government consider citizens as the heart of the Emirate; ex-pats the blood.


Ninety-six percent of income for the Emirate is generated through tourism, whilst the other 4% mostly comes from oil.  This place appears to have been designed with that statistic in mind.  It is geared to the tourist dollar with more hotels per square kilometre than you would care to mention, as well as a plethora of tour companies, amusement parks, museums and shopping malls.

A city of contrasts indeed...
Posted by Meredith at 1:36 PM